The Hammond organ is an electric organ, invented by Laurens Hammond and John M. Hanert it was first manufactured in 1935. Various models have been created, most of which use sliding draw bars to create various sounds. Until 1975, Hammond organs generated sound by creating an electric current from rotating a metal tone-wheel near an electromagnetic pickup. Around two million Hammond organs have been manufactured, and it has been described as one of the most successful organs. The organ is commonly used with the Leslie speaker.

The organ was originally marketed and sold by the Hammond Organ Company to churches as a lower-cost alternative to the wind-driven pipe organ, or instead of a piano. It quickly became popular with professional jazz musicians, who found it a cheaper alternative to the big band. Jimmy Smith’s use of the Hammond B-3, with its additional harmonic percussion feature, inspired a generation of organ players, and its use became more widespread in the 1960s and 1970s in rhythm and blues, rock and reggae.

Laurens Hammond graduated from Cornell University with a mechanical engineering degree in 1916. By the start of the 1920s he had designed a spring-driven clock, which provided enough sales for him to start his own business, the Hammond Clock Company, in 1928.  Hammond got the idea for the tone-wheel  by listening to the moving gears of his electric clocks and the tones produced by them. He gathered pieces from a second-hand piano he had purchased for $15 and combined it with a tone-wheel generator in a similar form to the tel-harmonium, albeit much shorter and more compact. Since Hammond was not a musician, he asked the company’s assistant treasurer, W. L. Lahey, to help him achieve the desired organ sound. To cut costs, Hammond made a pedal-board with only 25 notes, instead of the standard 32 on church organs, and it quickly became a in effect standard, 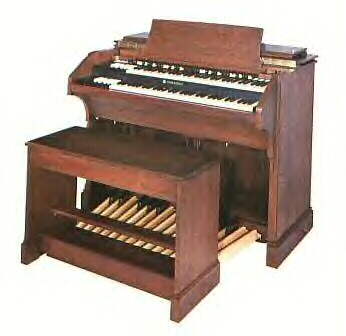